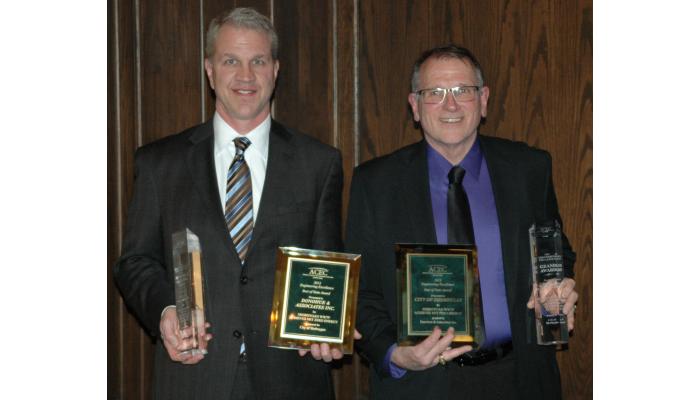 Donohue & Associates, Inc. and the City of Sheboygan’s Regional Wastewater Treatment Facility recently received the top honor in ACEC (American Council of Engineering Companies) Wisconsin’s 2013 Engineering Excellence competition. The 2013 Grand Award recognizes the collaborative effort between Donohue and the City of Sheboygan to improve energy efficiency, production, and recovery at the treatment facility.

Over the past decade, facility Superintendent Dale Doerr recognized that he could not control energy costs, but he could control how much energy his facility consumed and generated. He focused on making energy efficiency improvements with the ambitious goal of eventually becoming energy self-sufficient.

“This project is the culmination of concerted efforts to achieve net zero energy with biogas-derived electricity,” commented awards judge Rick Niederstadt, PE. “This is a monumental achievement and one that demonstrates a commitment to sustainability and the use of innovative technologies.”

The award-winning project designed by Donohue included anaerobic digestion improvements to increase digestion capacity and biogas production, and 400kW of additional microturbine capacity to convert the large quantity of biogas released from energy-rich high-strength waste to heat and electricity. Innovative and energy-efficient linear-motion mixers were used to increase biogas production (the first use of this technology in Wisconsin).

The microturbines have paralleling switchgear that synchronizes the output with the electric utility, allowing supplemental power usage to the facility and the ability to export power to the grid when the generated power exceeds the facility’s power requirements.

Donohue also received a Best of State Award for its work with the Heart of the Valley Metropolitan Sewerage District (Kaukauna, Wis.) in establishing an innovative inflow/infiltration analysis that resulted in a Sustainability Plan and over $40 million in cost savings for member communities.

Headquartered in Sheboygan, employee-owned Donohue & Associates, Inc. has 105 employees across 12 offices in Wisconsin, Illinois, Indiana, Minnesota, and Missouri. Donohue has won over 25 state, national and international awards for engineering excellence. The firm is ranked as a Top 500 Design Firm by Engineering News-Record.

The City of Sheboygan owns and operates the 18 million-gallon-per-day Sheboygan Regional Wastewater Treatment Facility, serving seven area communities and 68,000 people across 60 square miles. Because of the City of Sheboygan’s resolve to achieve energy self-sufficiency, the Sheboygan facility is now an important energy case study for municipal wastewater treatment facilities throughout the United States and around the globe.

At Donohue we strive to always improve and offer unparalleled services in the industry.

Attention to our clients needs has allowed us to produce award-winning projects since 2002.